Home > In the News > Barack Obama and Climate Change 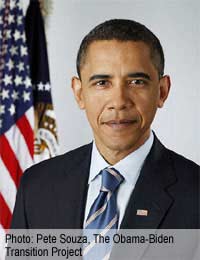 In November 2008, the United States of America elected Barack Obama as their next president. As Obama prepares to officially enter the White House in January 2009, the world political stage is preparing to see how Obama’s snappy campaign slogan – Change – will be actioned. And change is certainly hoped for across the globe when it comes to the major issue of climate change. The world is waiting to see whether Barack Obama will change the US’ approach to global warming and the environment from George Bush’s administration.

In this article, we’re looking at how the Obama administration is shaping up in terms of environmental policy, and what part we can expect Barack Obama to play in terms of developing a future climate change policy.

The New Energy for America Plan

As part of Obama’s campaign manifesto, the New Energy for America Plan was proposed, composed of several domestic measures for the US to improve the overall energy efficiency of the nation and make long term commitments towards cleaner renewable energy sources for the future. The proposed measures included:

Obama on the International Stage

The final point – making the US a leader on climate change – is perhaps a key one. Frustrations over the continued reluctance of the Bush administration to make positive commitments over climate change and reducing greenhouse gas emissions have characterised the eight years of Bush’s presidency. Most notably, Bush’s refusal to ratify the Kyoto Treaty, which sets out specific targets for the US to reduce their overall CO2 emissions, has been a continuing stumbling block for the UN and other climate change talks.

A new international agreement is being sought in 2009 to succeed the Kyoto Treaty, when it expires in 2012. It’s hoped that Obama will take a more proactive and decisive approach to the global negotiations that will define the new treaty.

A Step in the Right Direction?

The President elect’s decision to appoint a leading environmental expert as his new director of the White House Office of Science and Technology Policy has been seen as a positive sign of a new response to climate change for the US. John Holdren is a Harvard physicist and widely respected in the scientific community. As reported in the Observer, former government scientific adviser in the UK, Sir David King, said of the appointment:

"This is a superb appointment. Holdren is a top-rate scientist and his position on climate change is as clear as you could get. This is a signal from Barack Obama that he means business when it comes to dealing with global warming."

With some positive signs that climate change is back on the agenda as a key topic in the US, it remains to be seen what practical effect Obama will have on the global climate change debate. His approach domestically appears to reconcile job creation and efficient economics with energy technology and energy efficiency; a strong indication that the US’ international approach will also be re-examined.