Home > Overview > What is Happening as a Result of Climate Change? 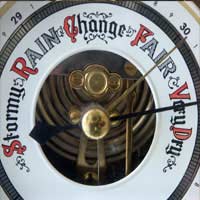 The man-made phenomenon of climate change will, in the long-run, according to scientists, have a detrimental impact on the future shape of the planet. These expert predictions are supported - and made all the more poignant - through the visible effects of climate change we're beginning to see today.

Not only will human actions affect the environment for future generations, but there's also a marked change in the global climate that can be highlighted already. Here are some of the immediate concerns affecting us now.

The greenhouse effect, caused by the imbalance of greenhouse gases in the atmosphere, has been largely caused by the burning of fossil fuels - from cars to power stations to aeroplanes - that create CO2 emissions. The main outcome of the greenhouse effect is an overall rise in the earth's temperature. In the UK alone, the average temperature has increased by 1 degree Celsius since the 1970s. This may not sound like a lot, but even miniscule temperature changes equate to very significant environmental changes.

The effects of global temperature changes have been felt most sharply by the polar regions at either extreme of the world. Here, where ice caps cover the landscape, rising temperatures have been causing the caps to melt. The Arctic has lost a third of its ice since weather records for the region began in the 1970s - and 2007 was the worst year on record for ice cap loss. Some scientists believe that the recent accelerated rate of melting points to a bleak future for the poles, and even ice-free summers in the Arctic as early as 2030.

And it's largely the melting of the ice caps that's led to a notable rise in global sea levels. This poses a potentially devastating flood risk to coastal areas across the world, and many world cities, including New York and London, which are both located directly in flood plain areas. According to an Australian study, sea levels have risen by almost 2 centimetres every year since 1870, in line with temperature rises over the same period.

Floods, monsoons, hurricanes, heatwaves - all these weather conditions and more have hit the headlines over the past few years. In the UK alone, the past two years have seen some record-breaking temperatures, bringing water shortages to many areas, through to last summer's washout months of severe flooding, which affected widespread areas in Yorkshire, Lincolnshire, the Midlands, Gloucestershire, Worcestershire, Oxfordshire and Herefordshire.

Other headline-making weather occurrences have brought misery and chaos to other areas of the world, including Hurricane Katrina, which left the US city of New Orleans in tatters. The effects of climate change, whilst not to blame for naturally occurring disasters, have been thought to contribute towards their severity.

A warmer world threatens people and habitats. According to Friends of the Earth: "A recent study suggested that a quarter of land animals and plants, altogether a million species, could be made extinct by the middle of the century." Changes to natural habitats, caused by rising temperatures, water levels and climates, are already creating new challenges to eco-systems.

Scientific studies also show that many natural eco-systems have been severely disrupted by the onset of climate change and the interference of humans. Alpine and Arctic species are increasingly restricted in where they can live as their natural habitat declines, while whole coastal habitats could be wiped out by new sea levels.

What is Climate Change?
Share Your Story, Join the Discussion or Seek Advice..
[Add a Comment]
I do believe human beings have been damaging their home planet since the industrial revolution. I hope we take enough feasible measures to stop global warming or at leastkeep it at the present state.
eb - 18-Nov-16 @ 6:47 PM
The issue of climate change is caused by us.if we take it serious and avoid contribute to it.it is possible to prevent and have a least of it
my family - 9-Apr-16 @ 7:31 PM
we should work s a team if we re to achieve .climate change is an issue we should all be concerned about.
mullen - 27-Nov-15 @ 12:51 PM
i believe that humans have the ability as a species to change this planet for the better i just hope we can achieve that before it is to late
Dr.Jerard - 22-Oct-15 @ 1:27 PM
Put huge carbon taxes for the for Chinese import in our countries!
Lily - 1-Aug-12 @ 3:36 PM
Title:
(never shown)
Firstname:
(never shown)
Surname:
(never shown)
Email:
(never shown)
Nickname:
(shown)
Comment:
Validate: