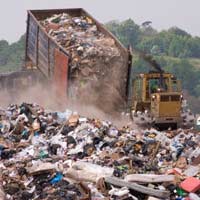 It is so easy to simply throw something in the bin, and not think about the consequences - or where that chocolate bar wrapper, tin can or bottle is going. But the reality is that your rubbish will be winging its way to a rubbish landfill site, literally a hole in the ground that houses our waste, much of which could be reused again, or recycled. And what's more, our landfill space is increasingly running out.

When you begin to look at the bigger picture, the act of carelessly throwing something in the dustbin becomes rather more significant. According to Waste Watch, every household in the UK produces over a tonne of rubbish each year, which is a total of 31 million tonnes overall. That's a lot of rubbish, and a lot of landfill space needed to put it all in!

Recycling - the act of changing an unwanted or used item into a new, useful item, is one way of reducing how much waste is created. And it's estimated that a massive 60% of what goes into our dustbins could actually be recycled instead, according to Recycle Now.

If these vital statistics were enough to get you sat up and listening, here are a few more facts and figures to shock and inspire you into action over rubbish and recycling.

Throwing Out Your Body Weight…

On average, every person in the UK throws away their own body weight in rubbish every seven weeks, according to Waste Watch - or, to put it another way, enough rubbish to fill the Royal Albert Hall in London is generated and thrown away every two hours.

Even managing rubbish costs money - a massive £1.6 billion a year in England alone, actually. That pays for the collection and removal of rubbish and transportation to a landfill site. Of course, if tonnage levels of rubbish were to reduce, so too would the cost to deal with it. That would free up vital resources to invest into recycling facilities and technology.

Plastic bags are one of the single most produced items in the UK, and a massive 13 billion of them are thrown away unnecessarily a year. The constitution of materials in a plastic bag makes it difficult for decomposition to take place - thousands of years, in fact. Shops and retailers are becoming more environmentally aware when it comes to giving away carrier bags - by charging for the number of bags customers take, or promoting the use of recycled bags. However, there's still room for improvement.

The good thing about recyclable products is that many materials can be recycled and turned into something else an unlimited number of times. This includes glass and steel cans - but worryingly, 10 billion steel cans still go to landfill sites every year. Sending more materials to be recycled is also a more energy efficient process than starting from scratch with a raw material - which is good news for the environment.

Recycling Rates Improve - But Could Be Better…

According to official statistics, the level of recycling in the UK has made promising steps in the right direction. The percentage of household waste that is recycled, including composting, has continued to increase, from 17.8 per cent in 2003/04, and up to 22.5 per cent in 2004/05. Regional differentiations, however, suggest that there are improvements that can be made in different areas - with the East of England the best performer, and the North East of England the worst. Plus, there's plenty more opportunity to increase your recycling rates when you consider that 60% of household waste need not go to landfill and could be recycled.

How to Reduce Our Waste

Tips & Advice on How to Recycle Waste

Why we Should Recycle
Share Your Story, Join the Discussion or Seek Advice..
I have read your blog thoroughly and got mind blowing information.... Please send me mail if your are going to improve something advance.. Thanks..
alanjay - 27-Nov-12 @ 3:08 PM
Title:
(never shown)
Firstname:
(never shown)
Surname:
(never shown)
Email:
(never shown)
Nickname:
(shown)
Comment:
Validate: