Home > At Home > Home Dining and The Impact on Climate Change 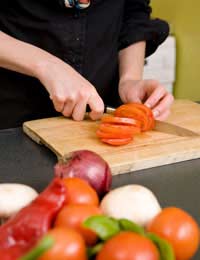 Both “food miles” and the idea of low-carbon foods have become well established parts of the whole climate change discussion, but the potential contribution of diet to global warming does not stop once the food has been produced, transported and bought.

How it is subsequently prepared and cooked can also have a big effect on how carbon-intensive the final meal is – and how much of a contribution to our carbon footprint it makes.

According to a recent World Wide Fund for Nature (WWF) study, our eating makes up around seven per cent of our own climate change contribution, while the Carbon Trust puts the figure at slightly more than double that.

While coming up with an exact measure of this kind is always going to be fraught with difficulty, the fact remains that from any consideration of resource usage and embedded energy, not all food is the same – and nowhere can we make more of a difference than when we choose to dine at home.

One of the clearest advantages from the point of view of food and our personal contribution to climate change when we opt to eat-in lies in the level of control we maintain over the meal we eventually consume. In part this is to do with the way it is prepared – the amount of water used, the energy required by the cooking method – but equally, there is also the question of waste to consider.

When faced with a mouth-watering menu, it can often be tempting to over-order – and what you don’t eat inevitably ends up in the bin. This would be bad enough in places where food-waste recycling facilities do exist, but where they don’t and the food simply ends up dumped in the local landfill site, from an environmental perspective, it is far, far worse. Decomposing food waste breaks down to methane – which is some thirty times more harmful as a greenhouse gas than carbon dioxide.

When it comes to environmental impact, there’s a world of difference between a lovingly prepared meal featuring vegetables out of your own garden and a pre-packed TV dinner containing ingredients flown in from goodness-knows-where! Food is as prone to the plague of packaging every bit as much as the rest of the goods we buy – and however handy convenience foods are, no one could really pretend that they contribute much to a sense of green well-being.

Two materials most commonly used in convenience food packaging – cardboard and plastic – are amongst the most difficult and uneconomic to recycle; non-decomposable plastic is especially problematic, accounting for a fifth of the waste by volume in the average dustbin.

While food waste itself can harm the environment and contribute to the danger of climate change, with so much of the world routinely going hungry, it is also both deeply unethical and morally indefensible. Making use of left-overs – in recipes such as bubble and squeak, for instance – was common place in Britain until surprisingly recently.

Sadly the headlong plunge into the so-called “throw-away society” extended to our views on food as well as items such as disposable razors and today, the thrifty and frugal approach of previous generations is sadly lacking. According to recent research, on average Britons throw away more than 30 per cent of the food they buy – amounting to a national total of nearly 7 million tonnes each year.

According to The Waste & Resources Action Programme (WRAP), preventing this waste would be the equivalent of taking 20 per cent of the cars in Britain off the road. Figures like that clearly make a compelling case for thinking very carefully about how we eat.

There are also environmental benefits to be gained when home dining involves entertaining other people, starting with the fact that at the very least you – as host – won’t be doing any travelling to the venue, which makes a pretty good start on the carbon front. It also becomes easier to match your chosen meal to the ethical needs of your guests – and the courtesy will not be lost on the growing number of people who have adopted organic, vegan or low-carbon diets specifically in response to the climate change issue.

Although we all know that everything we do has the potential to affect the environment, it is not until we really start to think about it that the full implications begin to sink in. When it comes to food, important though how we shop for our meals is in the first place, the carbon-cost of eating doesn’t stop there and the choices we make when we dine at home can have a major impact on the whole of our personal contribution to climate change.